Not so long ago, the Burroughes Building was little more than a place to plaster band posters.

Found on the south side of Queen Street, just east of Bathurst, its intersection has long been a chasm between the commercialized glitz of stores at Queen near Spadina and the arty vibe of Queen-further-West. The seven-storey building — which for 53 years ending in 2002 was the home of camping gear retailer King Sol — seems to shrink beside the multi-venue Big Bop, whose gritty shadow looms across the neighbourhood and all the wayward-looking music lovers who hang out around it.

“When people mention Queen and Bathurst, they immediately think of the squeegee people coming up to your car and cleaning your windshield,” says Lee Polydor, an associate with Queen Street Partners, which owns the building.
“Slowly, the perception is changing. That’s the nature of Queen Street.”

The Queen Street Partners helped that change along by recently completing an extensive overhaul of the Burroughes Building, and starting the search for a fresh roster of tenants to settle in the evolving area. Gone are the previously purple, green, and yellow columns of the main floor. Gone are the tacky windows and fixtures. The entire inside of the Burroughes Building has been sandblasted to its glowing, original brick and wood interior.

“We’re getting it ready, making it a vanilla shell,” says Polydor. 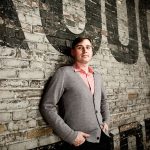